Organizing for a lineage society application

From Florence Jeffery via Facebook "After years of research I have finally realized how disorganized I am, now I want to apply to the Daughter of the Confederacy and see I have to organize first, but I start one tree and jump to another. Does anyone have this problem and any suggestions?

Contact your local United Daughters of the Confederacy (UDC) chapter. The registrar will have the application form.

Then as you put in a name and date of birth for yourself, gather a copy of your birth certificate. Follow suit with your parents and grandparents including birth, marriage certificates and death certificates as you go.

Where no public vital records exist, use church christening, baptism, marriage and burial records where info about parent-child relationships are indicated.

Newspapers may point to original records in courthouses and archives. Wills and probate packets on microfilm or in paper format may provide evidence of family relationships.

As to proof of service in a unit of the Confederate army or navy, you will need to find some sort of compiled military service record on microfilm and also at fold3.com. Consider the impact of Confederate Amnesty Papers. 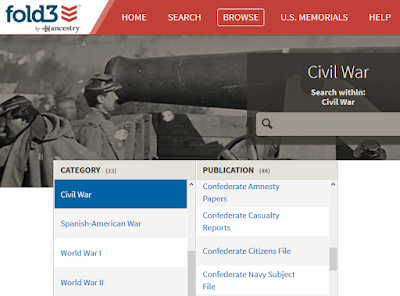 See also the National Park Service's Civil War Soldiers and Sailors database at http://www.nps.gov/civilwar/soldiers-and-sailors-database.htm  You will find information on individual servicemen, military units, prisoners and battles. The information there is derived from original records that you'll need to locate.

Several southern states paid pensions to Confederate servicemen. The National Archives (US) provides a page with the following preface: "The agencies listed below are repositories for Confederate pension records. The veteran was eligible to apply for a pension to the State in which he lived, even if he served in a unit from a different State. Generally, an applicant was eligible for a pension only if he was indigent or disabled. In your letter to the repository, state the Confederate veteran's name, his widow's name, the unit(s) in which he served, and the counties in which he and his widow lived after the Civil War. Some repositories also have records of Confederate Homes (for veterans, widows, etc.), muster rolls of State Confederate militia, and other records related to the Among these are Florida Confederate Veterans and Widows Pension Applications, 1885-1955 and Missouri Confederate Pension Applications and Soldiers Home Applications (at FamilySearch.org). For other states see: https://www.archives.gov/research/military/civil-war/confederate/pension.html

Your ancestor's gravestone may indicate the unit in which he served. The Department of Veterans Affairs (VA) "furnishes upon request, at no charge to the applicant, a government headstone or marker for the grave of any deceased eligible veteran - including Confederate Civil War soldiers - in any cemetery around the world." See: http://www.civilwarsoldiersearch.com/cemetery-and-headstone-records.html

Your task will be to prove each generation's link to the previous, and prove your ancestor's distinct identity, particularly when there was another by the same name in his community.


I undertook this process for my Daughters of Union Veterans application and supplemental.

God bless you in this endeavor. Our ancestors saw battlefield conditions we can only imagine. We need to honor their courage.

Here's where you'll find us:
Add this blog to your Feedly.com list of genealogy blogs